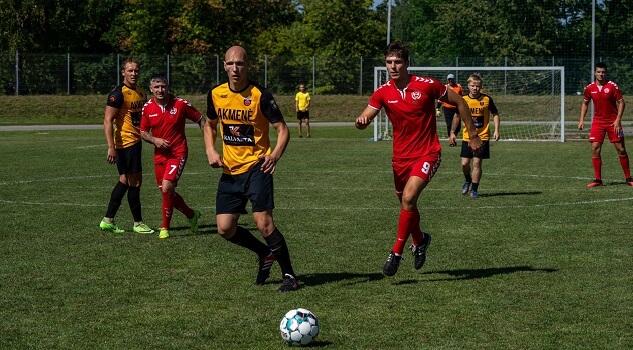 Last Saturday, the 3rd stage was played in the 2020 Lithuanian 7-aside Championship. For the first time in the history of Lithuanian championships, the stage was played in Naujoji Akmenė. Teams arriving in the north of Lithuania had a difficult stage because most of them had to play three matches. The exhausting heat and the intense schedule gave their own challenges – no team managed to win the maximum number of points, but at the end of the first round, the first place was retained by the Kaunas FK Arsenalas team.

The home team of SC-FK Akmenė started the third stage with a difficult and quite unexpected loss to the team of FK Polivektris from Vilnius, who won by the odd goal in three. Polivektris scored the winning goal in the last minute of the match when the former Sūduva footballer Valentinas Baranovskj scored a great free-kick from long-range.

However, after this defeat, the Akmenė team regrouped. The team, which received a lot of support from the spectators, crushed the second-ranked Jurbarkas Imsrė players in their second match by the result 8:0.

In the third match of Akmenė, Kaunas FK Arsenalas was in line, they’d already managed to defeat FC Šilalė-Prolain team 2:1.

In this match, Arsenalas managed to score two quick goals, but the team of the hosts of the stage demonstrated their character pressed the opponents and finally won 3:2. Akmenė managed to score two goals by successfully throwing the ball from the sidelines, so the fortune really smiled for the team.

“I am glad that the team recovered and defeated the two leaders after the first unsuccessful match. The men showed character, and the abundant support helped them discover strength. We defeated the leaders and showed that we have a good team that can fight for medals. I hope that the second round will be even more successful and we will win more points” – said Vitalijus Mitrofanovas, Mayor of Akmenė District Municipality after the match.

After this stage, the SC-FK Akmenė team takes the fourth place with 10 points and is 3 points behind the Kaunas FC Hegelmann Minifootball club in the third place. This team also lost the first match (1:4 to Jurbarkas Imsrė), but then won two victories – 4:1 against FK Polivektris and 5:4 against FK Merkys.

It should also be noted that the already mentioned FK Polivektris and FK Merkys have 10 points also, and FK Šilalė-Prolain have only 3 points less, so practically all teams are close to the third place and they really did not withdraw from the fight for medals.

Although all teams shared points, the leading two teams did not change. Jurbarkas Imsrė club, which won two victories and managed to defeat the FK Šilalė team for the first time in the Lithuanian minifootball Championship remained in the second place with 15 points, and Kaunas Arsenalas, which lost to Akmenė, has 16 points, and remained in the first place.

Kaunas city team just failed to increase their lead and now the opponents are approaching them, but Arsenalas, which became the champions of Lithuanian in 2017, has everything in their hands and them need to play the second round successfully.

The second round will start playing on August 29 in Varėna city, where the meetings of the 4th stage will be played.

The Lithuanian minifootball Association traditionally invites you to watch the 5 most beautiful goals of the Naujoji Akmenė stage, for which you can vote by clicking on the corresponding emoji.

Results of the 3rd stage of Lithuanian championship: