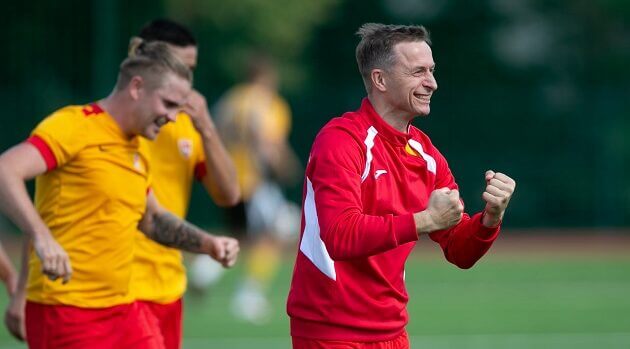 This Saturday the fifth stage of the Lithuanian Championship, organised by the Lithuanian Association, was played. For the first time, a stage took place in Prienai city and although the local team failed to score points, Kaunas Arsenalas left  with the biggest smiles. They established their position in the first place and retained the favourite status to win the championship in the last stage in Jurbarkas, next week.

They moved clear after two difficult victories against the nearest opponents.

In the first confrontation of the day, Arsenalas won the Kaunas derby, when they broke the team of Kaunas FC Hegelmann Minifootball, by a tight 2-1 margin.

They secured an even more impressive victory in the second match. Playing against Jurbarkas Imsrė, the team in second spot. Arsenalas was 0:1 behind the end of the first half and it seemed that Imsrė, would run out victors.

However, Arsenalas decided to take some risk and scored two goals in the last two minutes of the match. Tomas Krakauskas equalised the result and just before the final whistle forward Antanas Šliuževičius scored the winning goal. After such a dramatic victory, Arsenalas was already dancing the victory dance at the Prienai Stadium, as there is very little left before they could secure the title of champions which they had won previously in 2017.

Currently Arsenalas have 28 points and are 4 points ahead of Jurbarkas Imsrė who is in second place.

On Saturday, September 12, the last stage of the Lithuanian minifootball Championship will be played in Jurbarkas where all eight participants of the championship will play three matches. In order to become champions Arsenalas will have to win two games or wait for an Imsrė defeat and then win at least one match themselves.

“The match was very emotional, we had to play some real attacking football,  but it paid off as we took six points and we are returning home with a smile on our face” – Ruslanas Bykovas, a member of Arsenalas team told us.

The debutantes of this year’s championship KKSC Prienai had not yet won points before the stage in their stadium, and unfortunately that remains the case.

However, with their home advantage, Prienai has shown that they have the potential to fight. Although the first match of Prienai was lost 2:6 to Jurbarkas Imsrė, in the second it posed a serious challenge to the third place Hegelmann Minifootball team. At one point the score was 3:3 but Hegelmann eventually won 6:4.

Prienai defender Povilas Andriukevičius struck a positive note after the stage in his city: “We still have to wait for points, but in the second match we saw that if we have a full line-up, we can really fight. I believe that things will be better next year.

The Prienai city stage was successful for the FK Šilalė-Prolain team. Šilalė together with the Arsenalas team, managed to win both matches. Šilalė defeated FK Polivektris 7:1 and edged SC-FK Akmenė 4:3. These two victories allowed the Šilalė team to rise to the fourth place.

However, SC-FK Akmenė currently has the same number of points (16), and Merkys has only three points less, so the last stage of the championship in Jurbarkas will guarantee a serious and persistent fight for the fourth place.

In the Prienai city stage there were many beautiful goals and the five most beautiful goals of the stage were chosen. You can see them in the video below and you can cast your vote for your favourite goal by clicking on the appropriate emoji.