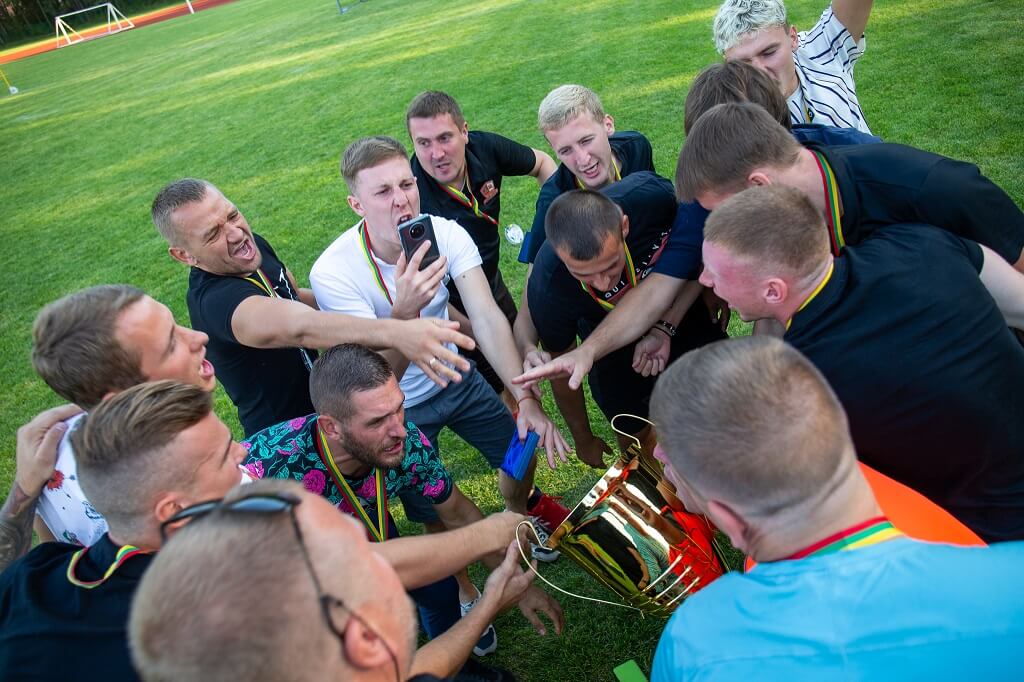 On Saturday the curtain of the Lithuanian 7-a-side football Championship was drawn at the stadium of Varėna Sports Centre.

The eight-team Lithuanian championship took place in a two-round system with each team playing 14 matches in six different stages, which were held in four different cities – Prienai, Jurbarkas, Naujoji Akmenė, and Varėna.

The men of Hegelmann Minifootball, who won silver medals last year, again came in second place, and the bronze medal was also preserved by the players of Jurbarkas Imsrė who won it last season Lithuanian mini football ambassador Deividas Šemberas presented the cups to all prize winners.

It was possible to see more former football players of the Lithuanian national team. On the occasion of the final round of the championship, a demonstration match took place between the Deividas Šemberas and Friends team and the Alytus RESE veteran’s team.

In the team of .Šemberas it was possible to see such players as Andrius Skerla, Andrius Velička, Vytautas Lukša, Gediminas Vičius, assistant of the Lithuanian national football team Tomas Ražanauskas and the already mentioned legend. There were even two Deividas Česnauskis on the field at the same time, only the second significantly rejuvenated the average age of the team, as the son made his debut.

However, the famous names did not bring victory this time, because the Alytus RESE team won this match 6:3. In the Deividas and Friends team, all three goals were scored with heads and it was done by Hegelmann Litauen coaching staff – Andrius Skerla scored twice and Andrius Velička added one goal.

This match was refereed by one of the best Lithuanian referees Gediminas Mažeika, who refereed in all stages of the Lithuanian 7-a-side Football Championship.

The champions turned out quickly

Returning to the battles of the championship itself, champions in Varėna became clear quickly. After the first match of the day, it became clear that no one could catch the Klaipėda City team.

City, who had a three-point advantage over Jurbarkas’ Imsrė, met the Jurbarkas team in the first match, so this match was effectively was for the gold. The first half was very stubborn and tense, but the teams did not score goals. From the side, it looked like it could be a one-goal match and that was practically the case.

In the second half, Klaipėda scored a goal thanks to rebounding, which completely changed the match. Imsrė started to hurry and press, but the players of the Klaipėda team organized two great counterattacks and scored two more goals. After the third goal, the stadium was covered with a cloud of orange smoke, because orange is the colour of the Klaipėda City team.

Although Ignas Kirsnys still managed to stand out in the ranks of Imsrė, this goal was not enough, and Klaipėda City triumphed with the result 3:1. This victory brought not only three points, but also a championship cup.

“The tension was high. Each mistake could cost a great deal, so we were lucky to take our first chance and then the match became more open. The first goal was the cornerstone and the second had already finished them. We went to Varėna with the aim to win the first match and thus secure the title of champions. The level of football in Klaipėda is high, we participate in three tournaments and have played 52 matches in four months, so we have good form and it probably helped us win the Lithuanian Championship”, – said one of Klaipėda City team leaders Donatas Stankevičius, who also promised that Klaipėda City will defend Lithuania’s honor in the 2022 Socca Champions League, which will take place in Slovenia.

Although Imsrė defeated Varėna’s Merkys 9:2 in their second match, Hegelmann Minifootball two victories allowed them to rise to the second place and overtake Imsrė by one point and win silver medals for the second time in a row, so Imsrė took bronze medals for two years in a row.

“We tried to calculate what we would need to become champions, but such calculations do not lead to good, so we just wanted to win our matches. We managed to do that, so I’m happy with the Varėna‘s round. We stayed in the second place for second year, so I’m happy, and there’s still room for improvement, as we can see. We need to improve the realization of goalscoring opportunities and we will emphasize this for next year,” – said Giedrius Brazaitis, coach of Hegelmann Minifootball.

“The mood is not bad. We came for the gold but didn‘t get it. Still, bronze medals are here. The second half of the championship was perfect with only one defeat against Klaipėda City team, which resulted in us not becoming champions. Next year we promise revenge,” – said Ignas Kirsnys, the most productive player of Imsrė. 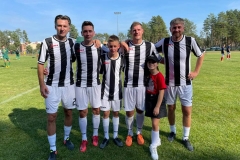 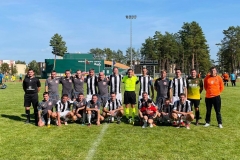 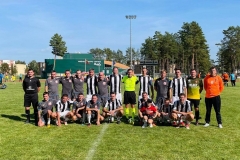 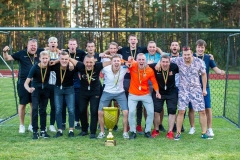 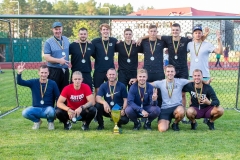 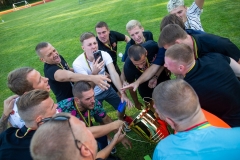 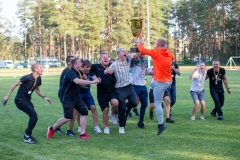 Other positions and Prienai jump

In addition to the distribution of medals, a persistent fight took place among other teams, as they were all fighting for positions. Only Kaunas Arsenalas, last year’s champions, knew that they would neither rise nor fall above or below fourth place.

Nevertheless, Arsenalas took the field seriously and in the first match, they finally managed to break Varėna’s Merkys resistance with result 4:3.

In the second match, Arsenalas met with the new champions Klaipėda City, so it was possible to see the confrontation between the former and current champions. However, Klaipėda City was already in a too festive mood and Arsenalas made more efforts and won with the result 4:2.

KKSC Prienai managed to finish the championship very successfully. Before the Varėna stage, the team was in the last place, but in the last round won two games against its direct competitors – 6:4 broke Panevėžys Ekranas and 8:3 defeated Akmenė. It was these teams that remained in the sixth and last place respectively, and Prienai after two victories in a row with 11 points rose to fifth place in the standings.

After the finish of the championship and the presentation of cups and medals, the winners of the teams were still waiting for a gala dinner, during which the organizers of the Lithuanian 7-a-side Football Championship also presented individual awards.

Klaipėda City team captain Justas Adamas was chosen as the best player in the championship.

Results of the final, 6th stage of the Lithuanian 7-a-side Football Championship: