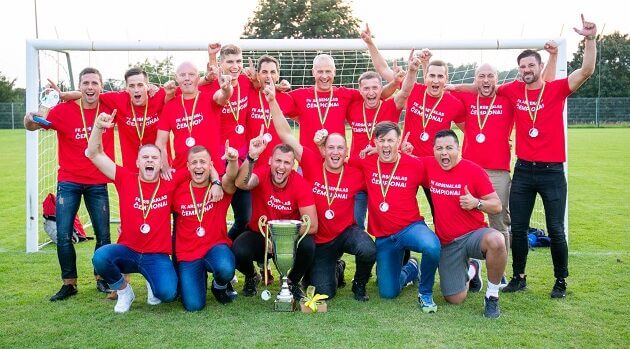 The last, sixth stage of Lithuanian 7vs7 the championship was played in Jurbarkas last Saturday. The favourites before this stage were Kaunas Arsenalas team and they took this opportunity with both hands and became the champions for the first time in three years.

Another Kaunas city team – Hegelmann Minifootball – took the second place and won silver medals, and Jurbarkas Imsrė took the third place. It is worth mentioning that all the winners improved their results compared to the 2019 season.

The last round of the championship in Jurbarkas, which was broadcast live, was long and some teams had to play three matches in one day. To become champions Arsenalas had to win two matches themselves – or wait for Jurbarkas to slip up.

So Arsenalas received the gift in the first match of the day. Imsrė, who had home advantage, did not keep up with Hegelmann Minifootball team in his first match, losing 0:3. Arsenalas won their game by 3:0 against KKSC Prienai so right from the beginning, they knew that in the evening they would raise the champions cup.

Their delighted boss, Karolis Vasiliauskas said: “We are very happy. This year we gathered a strong team, strengthened with some players, and were moving steadily towards our goal. We have become champions and now it’s time to celebrate!”

Silver also travels to Kaunas too

At that time after the first lost match, the home team of Jurbarkas did not find their game in the second match either, and drew 2:2 with the SC-FK Akmenė club.

Only in the third match of the day Imsrė really showed what they can and enjoyed their game in the match versus FK Šilalė-Prolain. Imsrė crushed them with the result 8:2 and was left with bronze medals.

SC-FK Akmenė team tucked in just behind the winning trio but still had a seven-point deficit. The team that came to Jurbarkas without substitutes demonstrated its fighting spirit and drew not only with the Jurbarkas team but also with the champions Arsenalas. This game also ended at 2:2.

Awards – from the hands of legends

The final stage of the Lithuanian minifootball Championship was watched by the legends of Lithuanian football – Stanislovas Danisevičius and Valdas Ivanauskas. Those stars remained fascinated with the championship and the team’s skill levels. Both were former international stars for their country and gave a congratulatory words to the teams and presented medals and cups to the prize-winners.

They not only congratulated the winners but also presented individual awards. Four individual trophies were distributed on the beautiful pitch of Jurbarkas Stadium. Kaunas Hegelmann Minifootball team received the coolest team’s social network communication trophy and Matas Venslauskas, the manager of Jurbarkas Imsrė, was chosen as the best team manager.

Aistis Stanaitis, a member of Kaunas Arsenalas, was chosen as the best player of the championship and Imsrė striker Laurynas Danielis won the golden boot. During 11 matches Laurynas Danielius managed to score as many as 17 goals.

Results of the 6th (final) stage of the Lithuanian minifootball Championship:

The final tournament table of the 2020 Lithuanian minifootball Championship: