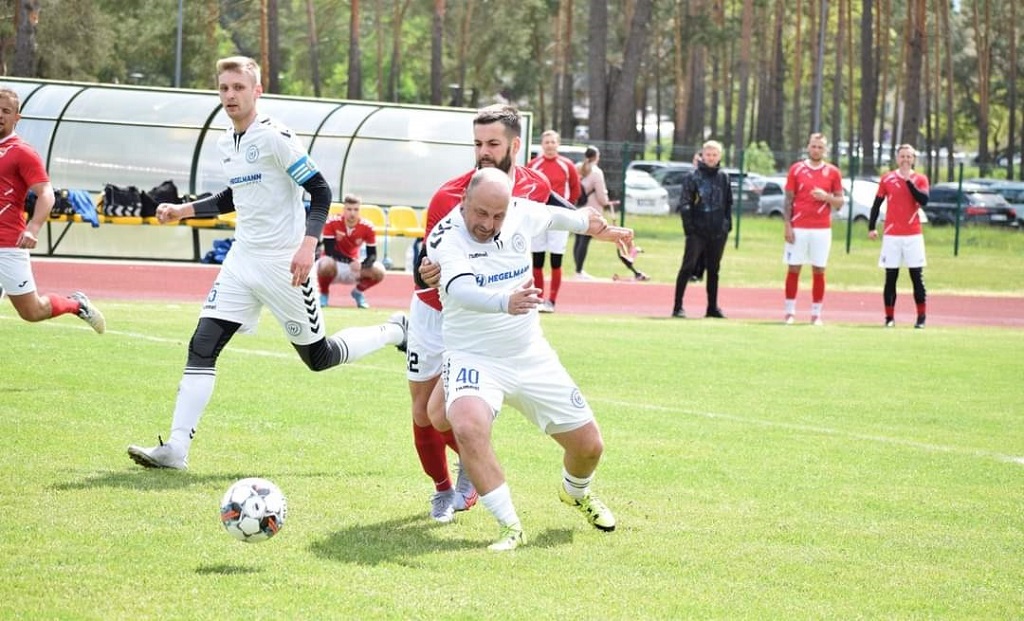 The Lithuanian National Team announces a new head coach – and he brings with him some real international experience.

National player Mindaugas Grigalevičius – with two caps for his country  and a professional career stretching back to 1999-  is taking over the reins of the national team. It is he who will lead the national team to the matches of the Socca World Cup in Hungary.

He takes over from Robertas Šuškevič, who was appointed as the coach of the Lithuanian team in the spring. He spent several months preparing the team for the upcoming matches, but due to the changes in the time and place of the World Cup, the coach will not be able to stay at the helm of the team for personal reasons.

“We want to thank Robertas for his hard work. In recent months. He has worked well and prepared the national team, so we are very sorry that due to the circumstances we cannot extend the cooperation. At the same time, I want to congratulate the new coach of the national team, Mindaugas Grigalevičius. He is closely related to small sided football and I am sure that he will achieve great results in Hungary and inspire the national team to wonderful victories”, said Tomas Butkus, the manager of the Lithuanian team.

40-year-old Grigalevičius was a real goal machine in the A-League (Lithuanian Top division). He represented such clubs as Vilnius “Polonija”, Vilnius “Žalgiris”, FK “Šilutė”, Vilnius “Vėtra”, Tauragės “Tauras”, Vilnius REO and FBK “Kaunas”. In the ranks of the latter, M. Grigalevičius scored as many as 30 goals and became the A-League champion in 2007. The former footballer has also played in the Faroe Islands, Armenia, and Norway.

In total, the former A-League striker scored 59 goals and provided 11 assists in 139 games.

Grigalevičius started his coaching career in indoor football in 2016, when he successfully coached the Kaunas “Vytis” team and became the Lithuanian champion several times with them. For the past few years, Mindaugas himself has been stepping onto the mini football field with the Kaunas “Hegelmann Minifootball” team and showing good results in the Lithuanian small-side football championship.

“Football has been close to me all my life and I have never been away from it. After I finished playing 11 A side football, I started playing indoor football in the then Kaunas “Vytis” [now “Kaunos Žalgiris”] club, and in 2016 I became the coach of “Vytis”. Already in the first year, we became Lithuanian champions, and in general, during the three years when I worked at “Vytis” we won everything in Lithuania. In the second season, we reached the third stage of the UEFA Futsal Champions League – we entered the top 16. We played against the best futsal player Ricardinho and the Madrid “Inter Movistar” club led by him”, explained Grigalevičius, as he shared his experience.

Explaining his philosophy on the game , he set out some firm views: “I still play indoor football and small-sided football myself, so I know the intricacies of this sport well. I myself like to play the kind of football that is played with the head. I don’t like it when teams play “hit-anywhere” football. I can’t stand it, that’s why I will demand a smart game from the national team, not to hit anywhere, but to look for a free team member and pass the ball”, – insisted the new manager of the Lithuanian mini football team. 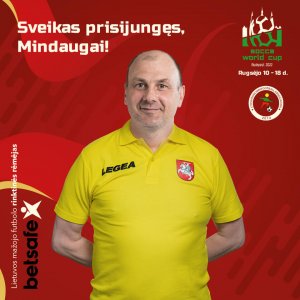 Grigalevičius will work together with physical training coach Giedrius Brazaitis on the national team. The latter also worked for the Lithuanian team in the Crete World Cup in 2019, when Lithuania for the first time in its history reached the last 16 but fell to England in that round.

The new national team head coach will not be working together with G. Brazaitis for the first time. This duo worked together in the indoor football club of “Vytis”.

And the new coach was delighted to be teaming up with his old friend, adding: “Communication with Giedrius has never stopped, so it is nice that we will be able to work together again in the coaching staff. This is a really good thing. We know each other very well and we can share our experience with the team”.

The feelings are reciprocated: “It’s great that we will be working together again. In 2019, I worked with Armando on the national team. I didn’t know him well then, but we got along easily. Now it will be even easier because I know Mindaugas very well. I think that we will work together without problems and it will give a result“, – added Brazaitis.

There are now less than two months left before the trip to the Socca World Cup, so M. Grigalevičius is in a serious mood for work.

“Soon it will be necessary to gather with the national team and, as I like to say, sit in the stands and look at the general picture of the national team, understand which position may be a little weaker, and which will be our strong side of the game,” – former striker shared his thoughts.

For the new coach of the national team, it is not very important who Lithuania will have to play against in the world cup, but if it was his will, he would really like to try his hand against Brazil. M. Grigalevičius knows the football of this country very well because he himself had to train several Brazilians in Kaunas “Vytis” team.

“The fact is that everyone would like to play with Brazil. I know the Brazilian mentality, their game very well, so it would be interesting to play with this national team in Socca World Cup”, – said M. Grigalevičius about the upcoming draw.