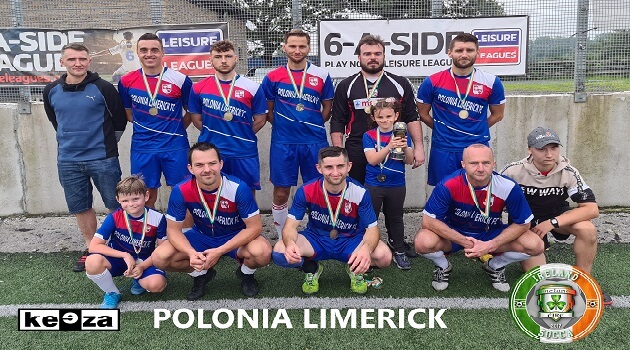 On Sunday morning, August 16, the roadshow arrived in Limerick for the next qualifying tournament for the Ireland Socca Championship 2020.

Eight teams competed against each other in two groups where the matches lasted 15 minutes continuously.

In group A there were two teams from Polonia Limerick, Carrig Rangers and the ABP Nenagh team from Tipperary County.

The action was started by Polonia Limerick II against ABP Nenagh, the game was quite even, with a slight advantage of the team from Limerick, who defeated the guests by one goal.

In the second match Carrig Rangers faced the first team of Polonia, who won 2-0. They set their marker at the beginning of the day, they showed that they were interested not only in the promotion to the finals in Cork, but also in winning the entire tournament.

In the second round, there was the eagerly awaited brotherly dual between the two Polonia Limerick sides. No one was expecting a hail of goals because both teams know each other so well, and so it proved, with the game ending goalless.

However, in the Carrig Rangers game against ABP Nenagh, irritated by the defeat in the first round, Carrig players easily beat ABP 4-0, scoring their first points in the tournament.

The decisive third round and the match between Polonia II and Carrig Rangers, and it lived up to expectations. The sides shared six goals and an incredible match ended all square.

It meant heartbreak, for Carrig because only one goal more and they would have had the chance advance from the group.

Elsewhere, in the last match in Group A, Polonia Limerick had few problems against ABP, who unfortunately left without a point or a goal.

Polonia Limerick qualified from the first place to the semi-finals, and Polonia Limerick II from second place, Carrig Rangers in third place with four points, and Nenagh players with no points.

The second series of matches was a wonderful duel between Blue Magic and Croatia, who had a great appetite for promotion, but had to beat the Old Boys team.

The brilliant game moved from end to end, but both goalkeepers did their job flawlessly and it was a goalless draw.

The next match was Polonia III versus Deportivo, it was an extremely tight encounter and only one misunderstanding between the goalkeeper and the defender of Polonia was the reason why the players from Dooradoyle could enjoy the next three points and a certain advance to the semi-finals.

In the third and last series of group matches, three teams still had a chance to advance from the second place, at the beginning Croatia played against Polonia III in a high quality game, there were yellow cards on both sides and a fierce fight for a finals slot

Unfortunately, this fight was lost by Croatian team after an exhausting tussle losing 1 to 0.

The players of the local Deportivo Dooradoyle took the first place, the Old Boys Blue Magic team moved up from the second place, the Polonia Limerick III players took the third spot, and the Croatia players unexpectedly finished in last with one point on their account.

Both teams from the first pair of semi-finalists had not conceded a single goal so far, so the defensive formations of both teams were well organised. However, the team from Polonia did not intend to lose in its backyard to the team from the capital and that is why from the beginning of the match we witnessed the dominance of the experienced team from Limerick, which by half time had managed to gain an advantage of three goals.

After the change of ends, the Old Boys tried to turn the tide of the game but were unable to threaten the very well-drilled host team, scoring only a consolation goal before the referee’s final whistle. The Polish diaspora did not give their rivals any chances and confidently booked a spot in the final, while ensuring their promotion to the final tournament in Cork.

In the match for the third place, the team Old Boys Blue Magic played against Dooradoyle so the group rivals and the players from Dublin met again following their previous encounter earlier in the day.

However, this was merely history, and the stakes of this match were well known to both teams who were determined to join this competition. From the beginning, we saw the full involvement of all players, including those on the sidelines watching their teammates play.

Deportivo players took the lead and continued attacking, after a few minutes they were leading 2-0, but that did not cut the wings of the Dubliners, who attacked the opponents’ goal more and more boldly, until they finally managed to score. The first half belonged to the players from Dooradoyle who went in with a 3-2 lead at the break. After the change of sides, Old Boys players went to attack with a clear goal – to win this match and take third spot. They took control and we did not have to wait long for the goals, because bolder attacks finally paid off and despite the very high determination of the Deportivo players, they could not stop Blue Magic, who ran out 5:3 victors, meaning that it is Old Boys Blue Magic Dublin team that will be reporting in the September finals in Cork. Applause is due not only to the players from the capital, but also to the Deportivo players who have left a lot of heart on the pitch.

At last, it  was time for the final match and here again was the opportunity to see the group rivals, but also teammates who had to play against each other this time to determine the winner of this tournament. The beginning of the match and a quick lead by the players of the first team of Polonia Limerick, both goalkeepers had a lot of work, but unfortunately the luck was not on the side of Polonia II who despite their great intentions. They could not cope with the attacks of their opponents and had to go to the break losing 0:3. After the break after switching ends, not much has changed, and the first team of Polonia Limerick turned out to be much better, defeating Polonia II 5:1.

Congratulations are also due to the second team of Polonia, and to the Old Boys Blue Magic players for their promotion to the finals.

Next stop on August 23 Kilkenny where we invite everyone to the next qualifying round.