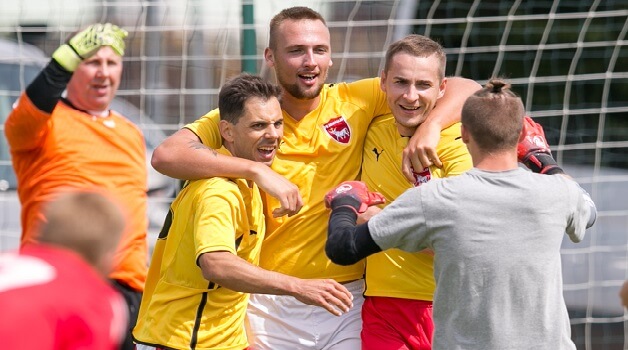 Last Saturday, eight teams from all over Lithuania gathered in Jurbarkas, and battled it out in the second stage of the Lithuanian seven a side championship.

After the first stage, Jurbarkas Imsrė, were in in the leading position, but this all changed and they were dethroned in front of their own spectators, and Kaunas FK Arsenalas, won both matches to take top spot.

Signs of recovery were also shown by the powerful Varėna FK Merkys, who also won both matches. All other teams in Jurbarkas shared the points.

The Kaunas derby received a lot of attention in this round of matches. As expected, the match between FC Hegelmann and FK Arsenalas was goal-filled, but not as tenacious as many imagined. Arsenalas easily beat their rivals 7:1 and proved that at least to this day they are a stronger Kaunas city team.

The next match was much harder for Arsenalas. They had to play against the hosts of the stage Jurbarkas Imsrė, who won their first match 5:2 against the newcomers of the championship KKSC Prienai. It should be mentioned that for the Prienai city team these were the first goals scored in this year’s championship.

In this match, Arsenalas led 2:0, but Imsrė showed their will and managed to equalise the scores. Both teams were looking for a winning goal, but in the end Arsenalas (10 points) scored the third goal at the last moment and won, which allowed them to rise to the first place in the standings and push Imsrė to the second (9 points).

“The second match was very difficult to call. Either team could have won. It is gratifying that this time we won, but the championship is still long, there are many matches left and that rise to the first place does not mean anything yet” – said Karolis Vasiliauskas, the captain of Arsenalas team.

Imsrė defender Mantas Murauskas was upset that his team lost the second match but was glad that his team would still have a chance to reach a rematch in a return game: “It is really disappointing that we missed a goal and lost at the end of the match. We had our chance to score a third goal, but it ended up worse. It is good at least that we will still have a return match with Arsenalas, so we will be able to rehabilitate after this defeat,” explained the rueful Mantas.

Vilnius FK Polivektris also won an impressive victory at the last minute. In its first match, Polivektris defeated FK Šilalė-Prolain, which was considered the favourite, 4:3. The Šilalė team itself was able to recover and at 50 minute equalized the result to 3:3. However, Polivektris scored the winning goal during the last attack and recorded the first victory in their account.

Polivektris’s warrior was keeper Andrej Borodich, who broke his nose during the match after colliding with an opponent and needed as many as four stitches. However, Andrej showed his iron will and in the second match of his team he had already returned to the field and was not afraid of any contact with the opponents and although Polivektris lost their second match 4:9 to Varėna Merkys, applause to Polivektris goalkeeper was heard throughout the match. As for Merkys, this team also won both matches of the stage and together with Arsenalas they were the only ones who achieved this feat.

It was a turnaround for Merkys, which left without points in Šilalė,  but defeated not only Polivektris in Jurbarkas, but also SC-FK Akmenė, with a 5-2 scoreline

Merkey’s team manager Dmitrij Krupovc, who wasn’t available in the first round, gave his reaction after the game and was unable to explain exactly what had bought about the turnaround. “I don’t know, maybe my return helped, but I think the men themselves understood after the Šilalė stage. The game is getting better, but we still make a lot of mistakes. Both matches were difficult, the result was equal in both of them for a while, but we have a long reserve bench and maybe it helped to score more goals and play more actively than the competitors,” stated the boss.

It was wonderful to see such skills on the pitch. Many members of the Lithuanian  team representing Lithuania at the World Cup in Crete play in the ranks of Merkys, and they had to play against the team captain Valentinas Baranovskij, who defends the honour of Polivektris, and the team coach Armando Tarlazis, who plays for SC-FK Akmenė.

Such beautiful images didn’t dominate in the ranks of the newcomers of the championship KKSC Prienai. Prienai city team is still without points and although they scored their first goals, they suffered a complete crushing in their second match. After a painful defeat in Kaunas derby, FC Hegelmann  poured out all the anger and wiped out Prienai team with the result 16:0.

Results of the 2nd stage of the Lithuanian Championship (Jurbarkas):