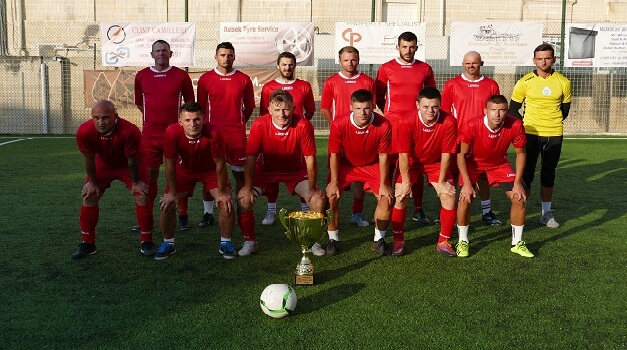 Zvezdan Vukovic was the star as his incredible six goals helped the White Eagles to win the Super Cup organised by the Maltese Small Sided Football Association when they beat United Stars by 10 – 7 at the Marsa Stadium.

This was the last game of the 2019/20 season after the league had to end abruptly due to the COVID-19 pandemic.

As a result it was decided to hold the Super Cup between the team that won the league and the team that finished in second position of the league standings, the dangerous United Stars side.

It was a wonderful, game, fitting for the conclusion, with Stars surprising their opponents early on, although the White Eagles recovered well and stormed back to win in the second half.

For the gallant United Stars, who gave a worthy challenge to their opponents, their star performer Gia Nikashvili notched a hat-trick, and there were doubles by Leontiev Konda and George Frendo.

After the match, the President of the Malta Association Ivan Milosevic presented the cup to White Eagles captain Zeljko Brkovic.

Mr. Milosevic declared himself happy with the event despite the difficulties: “This was the end of the first season of this competition in which it had eight teams competing in the league. Over the next season this high-level competition will be reorganized,” he commented afterwards.