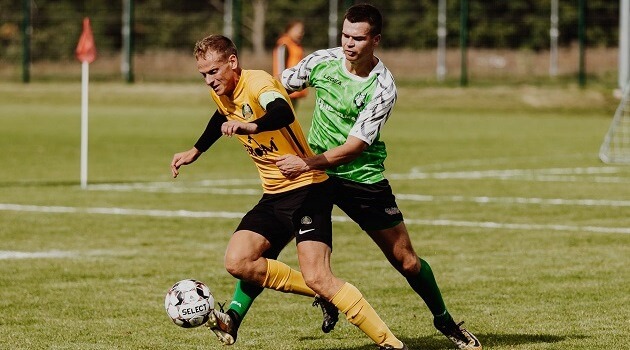 Saturday was the final day of Lithuanian Socca championship. That day all 12 teams played the last two games of their season and took the final spots in the table.

In the previous round of games El Dorado team from Vilnius secured their first Lithuanian champions title.

“We are glad that we are the champions. In the last tour we didn’t bring all the best players for various reasons, but I’m very proud of my players. They showed a perfect game against Polivektris and against Linksmakalnis we lacked some energy. However, the championship was a really good for us and now it’s time to celebrate,” said the El Dorado team captain Martynas Rašinskas.

They could have started their celebration even before the last games but El Dorado stayed professional and battled till the end.

In this set of fixtures, which were played in perfect conditions of Jurbarkas city stadium, five teams continued their battle for the last two spots on the podium.

As there were still five teams that fought for medals, the intrigue disappeared almost after the first games were played. Champions of 2018 FK Šilalė-Prolain took two easy wins. One was in Samogitia derby, where Šilalė won 11:3 against FK Telšiai and won 6:1 against FK Arsenalas team in the second game. Even the first win was enough for them as Šilalė secured silver medals.

“El Dorado asked as nicely so we agreed and handed them the title”, laughed FK Šilalė manager Artūras Vazbys.

“Talking a bit seriously, we had some difficulties in the beginning of the season as we didn’t knew if all the players from the previous season could come. Maybe this took the balance away and we lost some important points. However, I wouldn’t say that we had a bad season. Second place is good too and we still are the team with the most titles from Lithuanian championship,” added Vazbys.

The third place medals went for newcomers SK Linksmakalnis. This team got the luck they needed and their fierce rivals – Arsenalas ir Polivektris – lost important points so Linksmakalnis took their chance and grabbed bronze medals.

In order to do that, they needed to beat the new champions El Dorado and Linksmakalnis did that with ease. They won 6:2 and showed great football. In the second game they had to overcome one of the outsiders FC Suoliukas. They were in front 4:1, but Suoliukas managed to get back in to the game. However, Linksmakalnis showed cold nerves and managed to win 6:5.

We risked a little bit against Suoliukas. Maybe the weight of the game had influence of our game, bet we are glad that we reached a victory against them and also became a first team of this year, that managed to beat champions El Dorado. We had a perfect debut year and won the medals. We couldn’t ask for a better first season – said the coach of Linksmakalnis Giedrius Brazaitis.

In Lithuanian championship, while teams fought for title, there is also an award for the highest scoring team,and players competed to win the Golden Boot. For the second year in a row that title will go to FK Šilalė team as their player Vytautas Žukauskas scored 16 goals in 11 games and some of them were really beauties. The last year FK Šilalė striker Vytas Kurmis scored 30 goals and was the best goalscorer. This year he scored 11. goals.