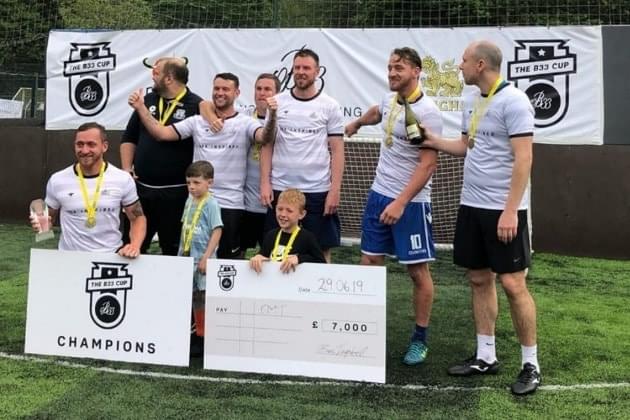 The Scotland 6 a side Team won a very special tournament this weekend, and the kind-hearted lads also made sure that the local children’s hospital had plenty of reasons to celebrate too.

The team, including, amongst others, Player/Manager, Graham Finlay, his brother Stephen, and the experienced Kev Hagen, walked off with the B33 Cup in Glasgow against 31 other teams including Professional Footballers and reality TV stars.

A delighted Graham told us this morning: “We’re on cloud nine, to be honest with you. We saw the competition advertised and as we were looking to keep ticking over in the summer, we wanted to have a go at one. This one looked like a good laugh – and we won it!” 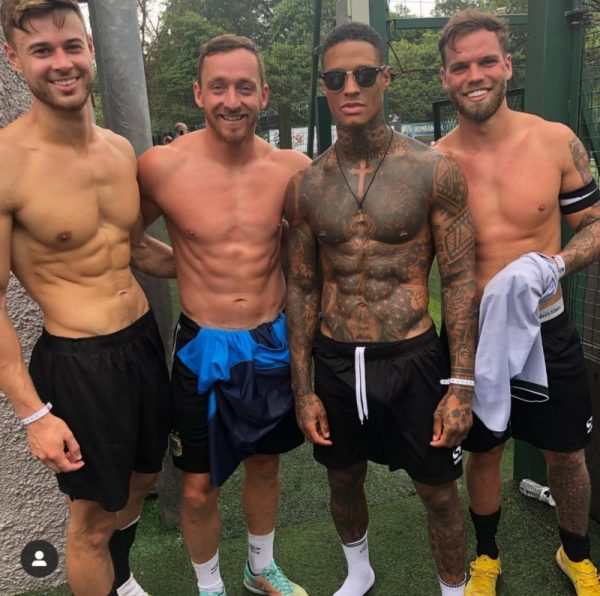 The matches saw former top Pro’s like Marvin Andrews, Simon Donnelly – capped 10 times by his country and ex-Rangers and Dundee favourite, Charlie Miller – and stars of Love Island like Dom Lever, who hit the headlines this year when he married Jessica Shears, who he met on the show and Alex Beattie.

They played with a host of Instagram stars, such as Tyone Hermitt, who is pictured here with Graham, Dom and Alex (left).

The boys had a star of their own in their corner too, as Graham explained: “We had [Scotland striker] Ross McCormack there too. He was going to play for us at one stage, but we had enough players, so he just supported us.”

They had enough good players too, considering they walked off with the winners cheque, although that was the furthest thing from the thoughts of the proud player/boss: “Look I am not just saying this, but the money was immaterial,” he stated, firmly.

What wasn’t so matter of fact though, was what happened to the other 30% of the £10,000 prize pot. The rules of the tournament said that £3,000 was to given to a charity of the winning team’s choice and Graham admitted he had no hesitation in knowing where that was best used. “We were thrilled to be able to give it to the Royal Hospital For Children in Park Hill Glasgow.”

Finlay then went on to add that the place had a special significance to both him and his brother Stephen. “Our older brother, Ian, was in there for the first two years of his life, our parents pretty much lived there for all that time, so we know of the wonderful work they do there. Hopefully this will help that continue.”