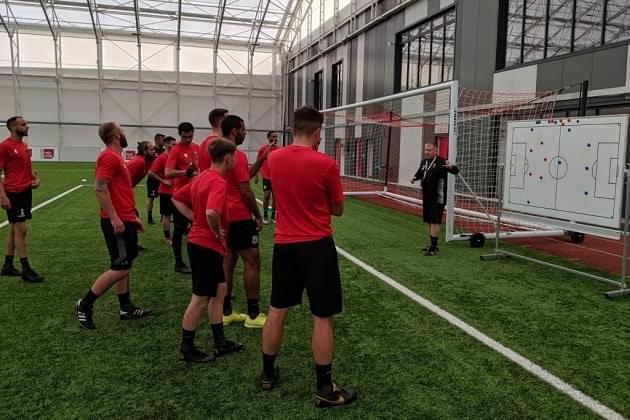 Producing World Class football is easier when you have top class preparation – and no one will be able to say Wales didn’t enjoy the very best in facilities when they step out on the beachside pitch in Crete this October for the ISF World Cup 2019.

Boss Barry John and his squad were able to use the sought after and world renowned indoor pitch at the University of South Wales, and for Barry it was a logical step.

“The Wales squad over the years has had many ex-students of the University in their training squad with Dave Vincent, Abdul Moshin, Nat Jarvis and Clayton Green all  involved in the Wales setup,” he said. “This year’s world cup squad has Tyrrell Webb and Louis Gerrard who have both studied at USW in previous years, also Lewis John one of our assistant coaches  is currently studying a Football Coaching and Performance degree at the University.”

“We are very grateful that the Wales World Cup squad had the chance to use their facilities ahead of the world cup in Crete.”

The USW is recognised throughout the world for its commitment to sporting excellence. The Wales squad – named just a fortnight ago – were put through their paces on a full-size indoor 3G pitch that is built to the Fifa Pro standard and World Rugby 22 standard.

They were in good company too, the same pitch is regularly used by international professional teams, such as the Wales national football team and Cardiff City Football Club, as well as the touring New Zealand, South Africa and Australia rugby squads.

A UK Socca Spokesperson praised both the Wales management for the session and the USW as a whole, saying: “The fact Wales were able to take advantage of such a wonderful opportunity, perhaps shows clearly just how 6 a side football has advanced. Many of these players have gone the whole journey from local leagues to their national team, and it that is now what this sport is about. Ordinary people being given extraordinary platform being provided by Leisure Leagues, the ISF and UK Socca to join the elite.”

Wales will find out their opponents in the World Cup later this month when the draw is made on 27th August.