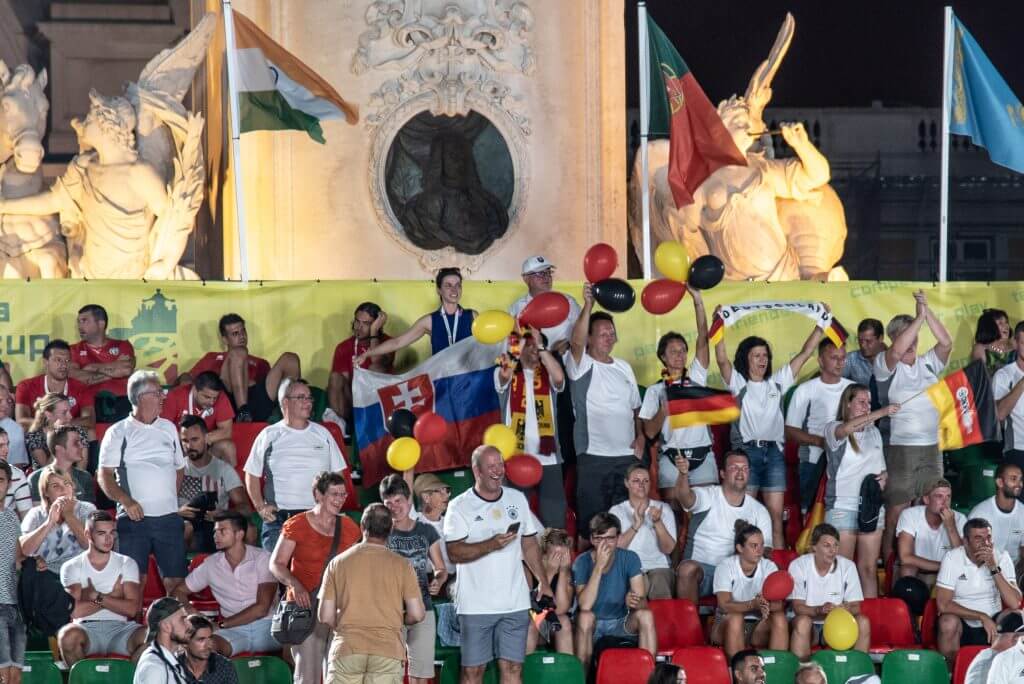 The second day of the ISF Socca World Cup was red hot with plenty of high scoring matches. The temperature soared to a sweltering 35 degrees celsius and shots on goal were on fire.

The day started with Moldova achieving a 6 goal clean sheet over Pakistan, with Iulian scoring a hat-trick.

Poland and Slovenia were the next teams to take to the pitch at the Trunkwala Arena located in the Praça do Comércio with Poland coming out on top 4-1.

The third match saw the highest scoring match of the tournament so far. France dominated the Irish team by 11-4. Luyindula of France scoring four of the goals with Corrigan scoring half of Ireland’s.

USA and Kazakhstan took to the pitch with the latter scoring the first goal of the game. However the USA team bounced back and taking a 3-1 win.

Ahead of the match, a representative of the USA said: “We are confident and ready to showcase what we can bring from the USA to this tournament. I think the game of Socca in the United States has developed a tremendous amount.

There are many players who don’t make it as professionals, so for those at lower levels, we can showcase the standard of football across America.”

Bulgaria met Egypt in the first match of the evening with the Europeans in command of the game throughout, scoring 11 goals and only allowing Egypt two. Petrov was the only Bulgarian to post a hat-trick, with Stankov and Chalakov with two goals.

Russia began their World Cup campaign with a 3-0 win over Moldova.

Wales were unable to recover after Belgium scored two goals in the 7th minute. Wales’ Jones responded with a goal in the 20th minute but were unable to successfully secure the penalty goal given in the second half.

England and Slovakia finished their intense first half goalless. England were first to find the back of the net with Murphy in the 23rd minute and McDonald straight after. Pecko of Slovakia narrowed the gap in the 34th minute but England’s Gardner responding with the final goal in the 35th minute.

Germany hammered India with a nine goal clean sheet. India could not defend the strong team who scored three goals in the first half and found the back of the net six times in the second.

The penultimate match of the day between Paraguay and Turkey was level 1-1 until a last minute crucial goal by Eriş of Paraguay went to the first VAR decision of the tournament.

The second day finished with China and Scotland which saw Scotland leading 2-0 with both goals coming from Andrew. Scotland won the match although Feng of China scoring a last minute goal.

Day three sees 20 teams in action, with every match live on the ISF YouTube channel and the ISF Facebook: