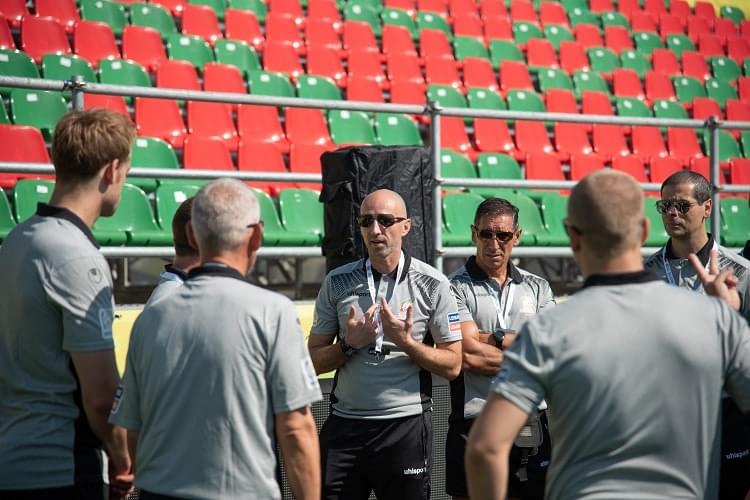 Following the success of the inaugural World Cup in Lisbon, Socca Executives been involved a consultation and evaluation process, to consider ways  they can further improve the whole experience for players, spectators and TV. One of these areas has been in the area of match officials and tournament direction.

Martin Cassidy, an ex-professional UK referee and CEO of Referee Support in the UK, has joined the organisation to take up the new post as Director of Referee’s for Socca and will oversee the progress and development of all ISF’s International Match Officials.

After his appointment, Martin commented: “From what I have seen already, we have a fantastic group of international match officials, with a very professional outlook, and extremely high standards. However, in the past they have been undervalued. One of the things which I have been most concerned by is the fact that the Senior Match Official, or Tournament Director has often arranged for payment to be made only to him, when the actual referee’s doing most of the matches are getting nothing. I made the decision that in Lisbon referee’s should be paid as I didn’t think it was right we continued with the situation whereby the Tournament Director was getting a large fee and the referees were getting nothing.

The International Socca Federation has also abolished the role of Tournament Director, and replaced it will a strong triumvirate of  Martin Cassidy as Director of Referee’s, Julia Colter from Germany in an upgraded role of Tournament Operations Manager and UK executive Tom Nash will now become Stadium Director.

Martin continued: “Clearly this gives a much greater and more strategic role for future events and it means that, without a Tournament Director taking the vast majority of pay, we can now spread that money across the referee’s much more widely, at future events, which is a much fairer thing to do”.

Mark Clattenburg, Socca’s premier international referee, has also had some input and he will be looking to get more involved in using his skillset and experience to offer guidance to Socca’s existing international Match Officials.

Martin continued: “we need to make sure that from now on that all our officials are treated fairly when it comes to things like pay and benefits, but more importantly, are seen as the most important people at the tournament. I am greatly looking forward to the future”.