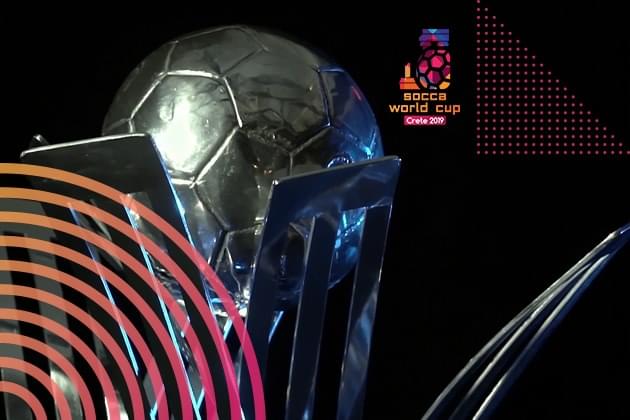 A trophy to symbolise the way football brings people together like nothing else in the world.

A trophy that takes inspiration from the much used, battered ball of the neighbourhood that people grew up with.

A trophy that shows six continents of the world competing in a spirit of friendship.

The World Cup 2019 trophy has it all.  And more, as it carries the hopes and dreams of footballers across the globe.

Specially minted, for a five figure sum,  and used for the first time at the Crete 2019 tournament, the ornate hexagon base is designed to look different from every angle, because after all, football is played differently in every corner of the world.

But in this age where it can sometimes feel that we are more divided than ever, nothing can unify like this tournament.

When you play for the #Spirit of football, then there is more at stake than money – not for us the £1m a week being offered to Gareth Bale. We know football is about so much more.

That is why we commissioned the world class sporting artist Nikos Karokis to make the historic silverware. Nikos won his first drawing competition at the age of sixteen, and created the logo for the European Soccer Tournament, won by Greece, of course – maybe this is an omen, only time will tell!

Three years later, in 2007 he was voted by 11.500 fans of Panathinaikos football team as the artist who would create their 100 year anniversary badge.

Now, this trophy will stand as a legacy for the next 100 years – the winner will be crowned on the 20th October. We hope it is you, but it doesn’t matter, because anyone who plays Socca is victorious.